Prior to the arrival of English settlers, Hanover County was a hunting ground for the Pamunkey and Chickahominy Native American tribes. The area was settled by plantation owners and tobacco farmers in the late 17th century.

Founded in 1720, Hanover County is celebrating its 300th birthday in 2020. Enriched with history, it has 39 sites on the National Register of Historic Places or the Virginia Landmarks Register and 56 Virginia Historical Markers. Richmond National Battlefield Park maintains four Civil War battlefields in Hanover and Hanover County maintains Civil War battlefield parks on the North Anna River and Cold Harbor. 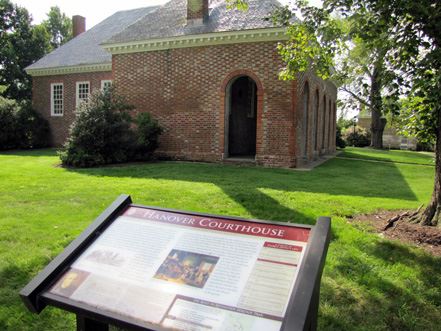 Hanover County’s symbol is the old Courthouse at Hanover Courthouse, which dates back to about 1740 and is one of the oldest in Virginia. Hanover native Patrick Henry gained fame as a young lawyer in its courtroom when he argued the “Parson’s Cause” case against the English Crown in 1763. This case is still re-enacted every summer in the historic Courthouse by actors associated with a non-profit organization called The Parson’s Cause Foundation. Also on the grounds of historic Courthouse are an Old Stone Jail that operated from the mid-19th century until the early 1960s and a memorial to Confederate soldiers that was dedicated in 1914.

Across Route 301 from Hanover Courthouse is Hanover Tavern, which originally served as an overnight stop on the stagecoach route between areas to the north and Richmond and Williamsburg during Colonial times. Visitors to the original Hanover Tavern included George Washington, the Marquis de Lafayette and Lord Cornwallis, who surrendered to Washington at Yorktown. Patrick Henry lived at the Tavern for several years after his marriage to the daughter of the Tavern’s owners. The oldest section of the current structure dates back to 1791. Barksdale Theatre, the nation’s first dinner theater, was founded in Hanover Tavern in 1953.

Henry, known as the “voice of the American Revolution” because of speeches like “give me liberty or give me death” was Virginia’s first governor and served five terms. He was born near Studley and lived in Hanover County for much of his life. Scotchtown, located west of Ashland, was his home during much of the Revolutionary period and is operated as a museum by Preservation Virginia. A number of events are held at Scotchtown throughout the year.

On Rural Point Road near its intersection with Polegreen Road stands a steel skeleton outlining the original dimensions of the Historic Polegreen Church meeting house. The South’s first Presbyterians met at Polegreen Church off what is now Rural Point Road. Built in 1748, its members included a young Patrick Henry, who said that the Rev. Samuel Davies was his inspiration as an orator. Davis was a key figure in the struggle for civil and religious freedom in Colonial Virginia.

The Church burned to the ground in 1864 when it was struck by artillery fire during the Civil War. It may have been the first non-Anglican church in Virginia

Some other interesting facts from Hanover’s history: